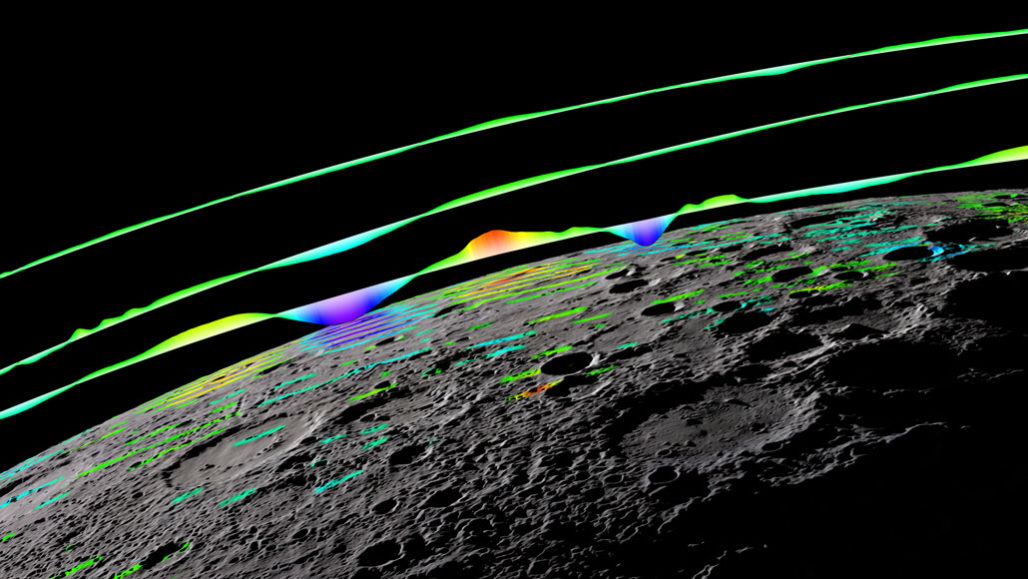 NASA’s MESSENGER spacecraft has detected magnetic signals in Mercury’s surface rocks, and even stronger ones in lower orbit. Red and orange in this image represent the direction of the field lines pointing off-planet, while blue and purple lines point inward.

Mercury’s core may be wearing a metal jacket. New experiments suggest the planet’s innards stay warm thanks to an insulating layer of iron sulfide, which could help to explain how the small world has held onto its magnetic field.

Rocky planets get their magnetic fields from the churning motion of liquid metals in a gooey core, a process called convection (SN: 9/4/15). But smaller worlds like the moon and Mars seem to have cooled down quickly, freezing their cores and shutting off their magnetic fields (SN: 9/7/15).

Mercury, however, has defied expectations. “Many people thought it was a dead planet,” says mineral physicist Geeth Manthilake of Clermont Auvergne University in Clermont-Ferrand, France.

But in the 1970s, NASA’s Mariner 10 spacecraft found that Mercury, the puniest planet in our solar system, generated a weak magnetic field. That field — only about 1 percent of the strength of Earth’s magnetic field — has probably been active for as many as 3.9 billion years, almost the age of the solar system (SN: 5/7/15).

The question of what kept Mercury’s core warm has long puzzled scientists. Now, Manthilake and colleagues have proposed an explanation: The liquid part of the core is surrounded by a layer of iron sulfide that lets heat out much more slowly than previously assumed, the team reports August 21 in the Journal of Geophysical Research: Planets.

“Based on lab experiments, we got some data to explain how actually you can generate such a low magnetic field and sustain it for such a long time,” Manthilake says.

Mercury’s interior is probably layered: a solid inner core, a molten outer core and perhaps a layer of iron sulfide at the boundary between the core and the mantle.

The team measured how efficiently an alloy made of iron and sulfur can carry electricity, and by extension, heat. Previous work suggests that Mercury’s core has a solid deep interior, plus a liquid outer layer made mostly of iron, sulfur and silicon (SN: 4/22/19). But like oil and water, those elements don’t mix thoroughly. As Mercury cooled, the more-buoyant iron-sulfur compound would have separated and floated to the top of the core, forming a separate layer.

The researchers put a few milligrams of iron with varying concentrations of sulfur in a high temperature and pressure chamber at the SOLEIL Synchrotron facility in Gif-sur-Yvette, France. Using a beam of X-rays, the team measured the exact composition of the iron sulfide alloy as it formed inside the chamber.

When the amount of sulfur in the iron was increased, the metal let out less heat by up to a few orders of magnitude. So iron sulfide at the top Mercury’s core could act like a lid on a pot, keeping heat inside, the team argues.

The lab result on its own doesn’t solve the mystery of Mercury’s magnetic field, says planetary scientist Steven Hauck of Case Western Reserve University in Cleveland, who was not involved in the new work. For one thing, the conductivity measurements disagree with previous measurements of iron sulfide’s conductive prowess. Manthilake thinks earlier experiments that didn’t track the metal’s composition with X-rays could have unwittingly included some oxygen in the metal, which would have affected the results. But it’s not clear that was the case.

Scientists also don’t know how much sulfur is in Mercury’s iron sulfide layer, or how thick that layer is. Future missions to the planet, such as the European Space Agency’s BepiColombo spacecraft arriving at Mercury in 2025, may help nail down those details.

But the new work offers “an important contribution” to the discussion, Hauck says. “Understanding the thermal conductivity of the core is a really important piece of info to be able to make future steps.”