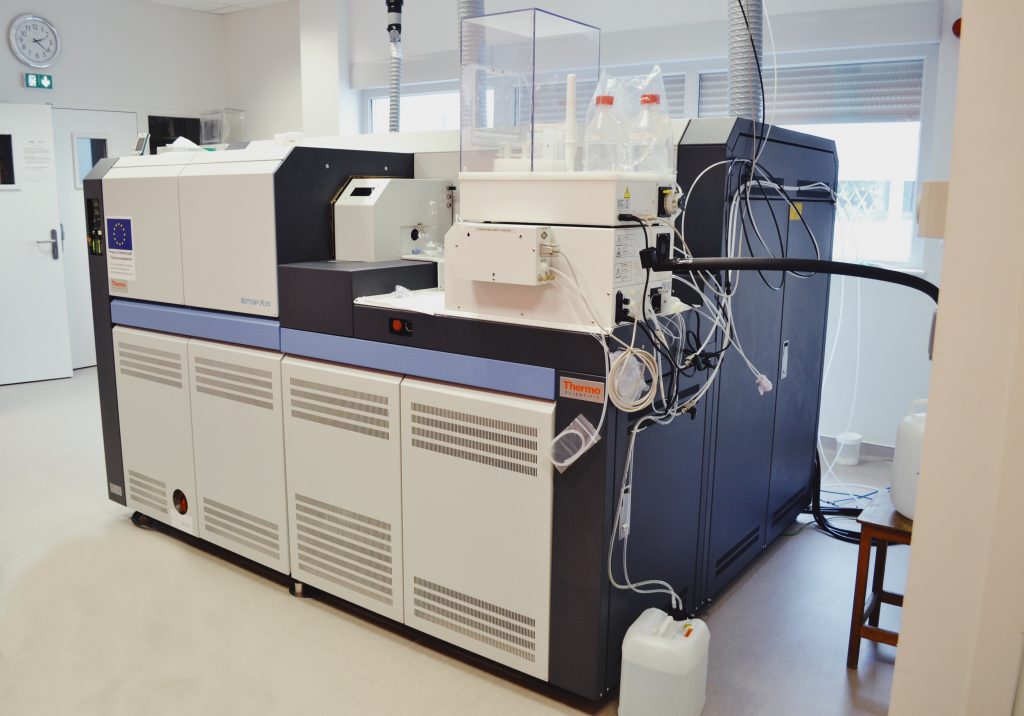 ThermoFisher Scientific’s MC-ICPMS Neptune Plus (Multiple Collector – Inductively Coupled Plasma -Mass Spectrometry) was funded by the Clervolc Laboratory of Excellence and FEDER funds. It was installed in the laboratory in June 2013. The mass spectrometer includes a high flow rate pumping at the interface (“Jet interface”), a dual focus (electric sector and magnetic sector analyzer) and nine Faraday cages allowing the simultaneous measurement of isotopes with a mass deviation of up to 17%. The combination of the “Jet interface” pump and specific cones (“Jet sample cone” and “X skimmer cone”) allows a significant improvement of sensitivities. These can reach 2500 V/ppm for heavy elements such as lead or uranium. The ionic intensities are converted into voltages via amplifiers with resistances ranging from 1010 to 1012 ohms, allowing detection in a dynamic range up to 400V. An ion counter device (SEM), supplemented by an energy filter (RPQ), equips the central cage of the spectrometer. It is possible to work with 3 fixed resolutions (LR: Low Resolution: 400; MR: Medium Resolution: 4000; HR: High Resolution: 10000).

The solutions of elements previously extracted from the geological samples and purified in the clean room are introduced either by a cyclonic spray chamber or by a Cetac Aridus II desolvation system. The spectrometer can also be coupled to the laser ablation device (Resonetics excimer 193nm M-50E) for the punctual analysis of isotopic compositions. This instrument is part of the French Geochemical and Experimental Network (REGEF).